You are here: Home / Uncategorized / Our Love Story.

I titled this post Our Love Story. I know if sounds all sappy, but I really wasn’t sure what else to call it. It really is our love story. This story is long, but I feel like every last detail is important. Here is how it started, how we started. On December 7th, 1995, my husband and I started dating. I remember it like it was yesterday. I was 15 and he was 16 almost 17. Something that may surprise you is that I actually chased him. Yes, me. I was a quiet and shy girl. So the fact that I chased him came as a shock to my friends and family. 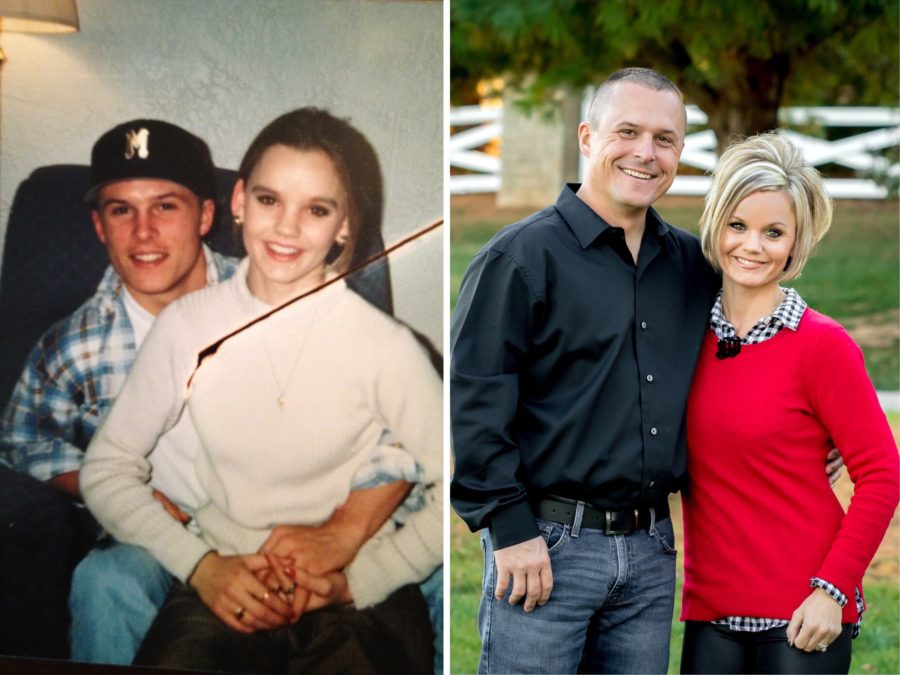 Jason and I lived in different towns. About twenty minutes from each other. We also went to different schools. Crazy right?!

A friend of mine who I went to school with was actually from the town Jason lived in. He started going to my school and we became friends. He introduced me to some of his friends from his hometown. I started dating a friend of his who lived there. We will call this boy B. One weekend my friend, B and I went to a party in his hometown. Turns outs I wasn’t B’s only girlfriend and all of the people at this party told me about it. Yep, that relationship was about to be over.

So as the evening went on, I spotted Jason, my now husband. He was sitting on the edge of the couch with his elbows resting on his knees. He was wearing a school jacket. You know the ones with the last names on the back. This jacket was covered, I mean covered in medals. He was seriously the hottest guy in the room in my opinion. And the jacket just put me over the edge!! Can you say Jock?! So I asked my friend who he was. He told me his name was Jason Tinnin, but he was dating the girl who was throwing the party. As soon as he told me this, I stopped right there. He was taken. 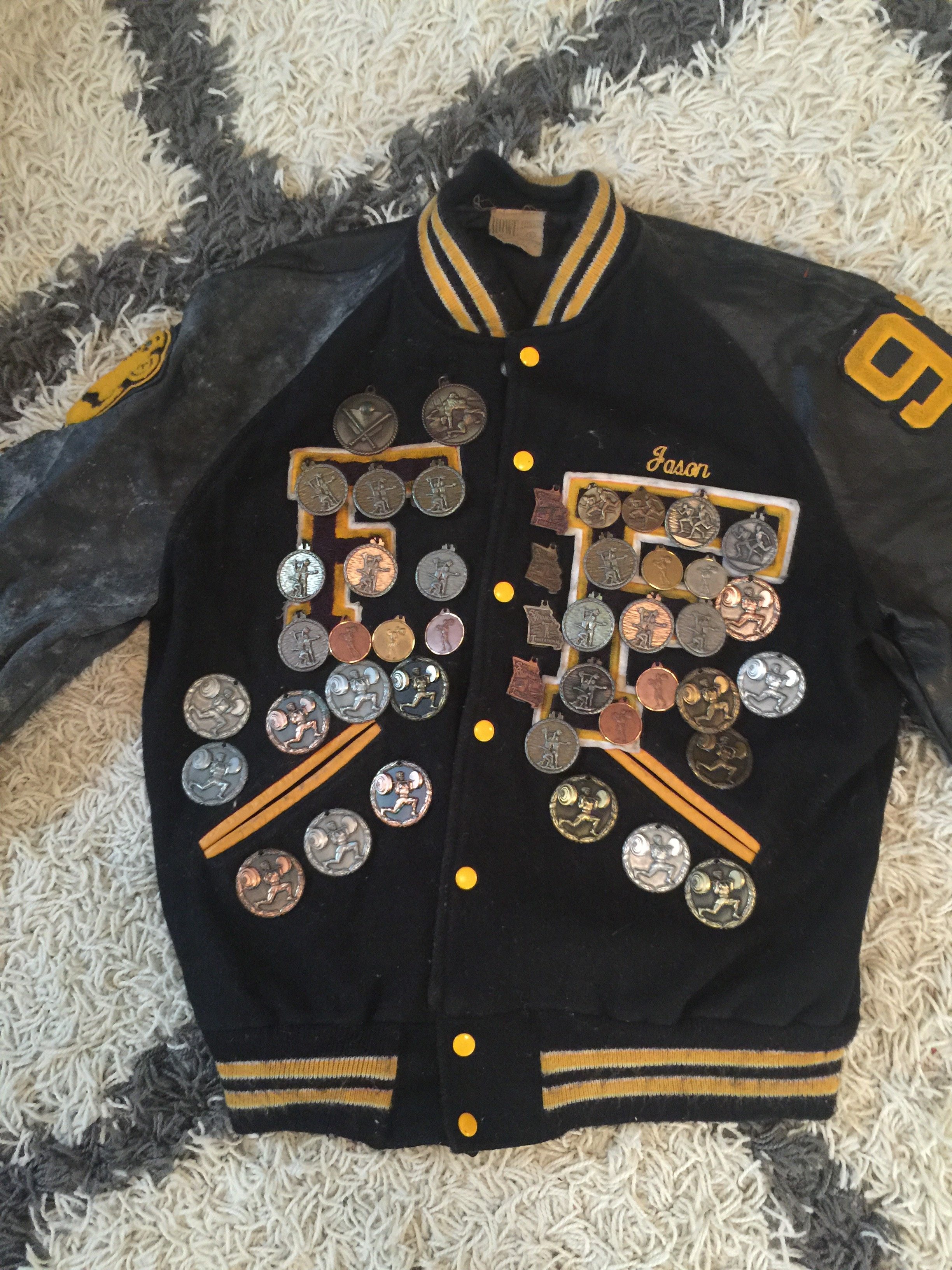 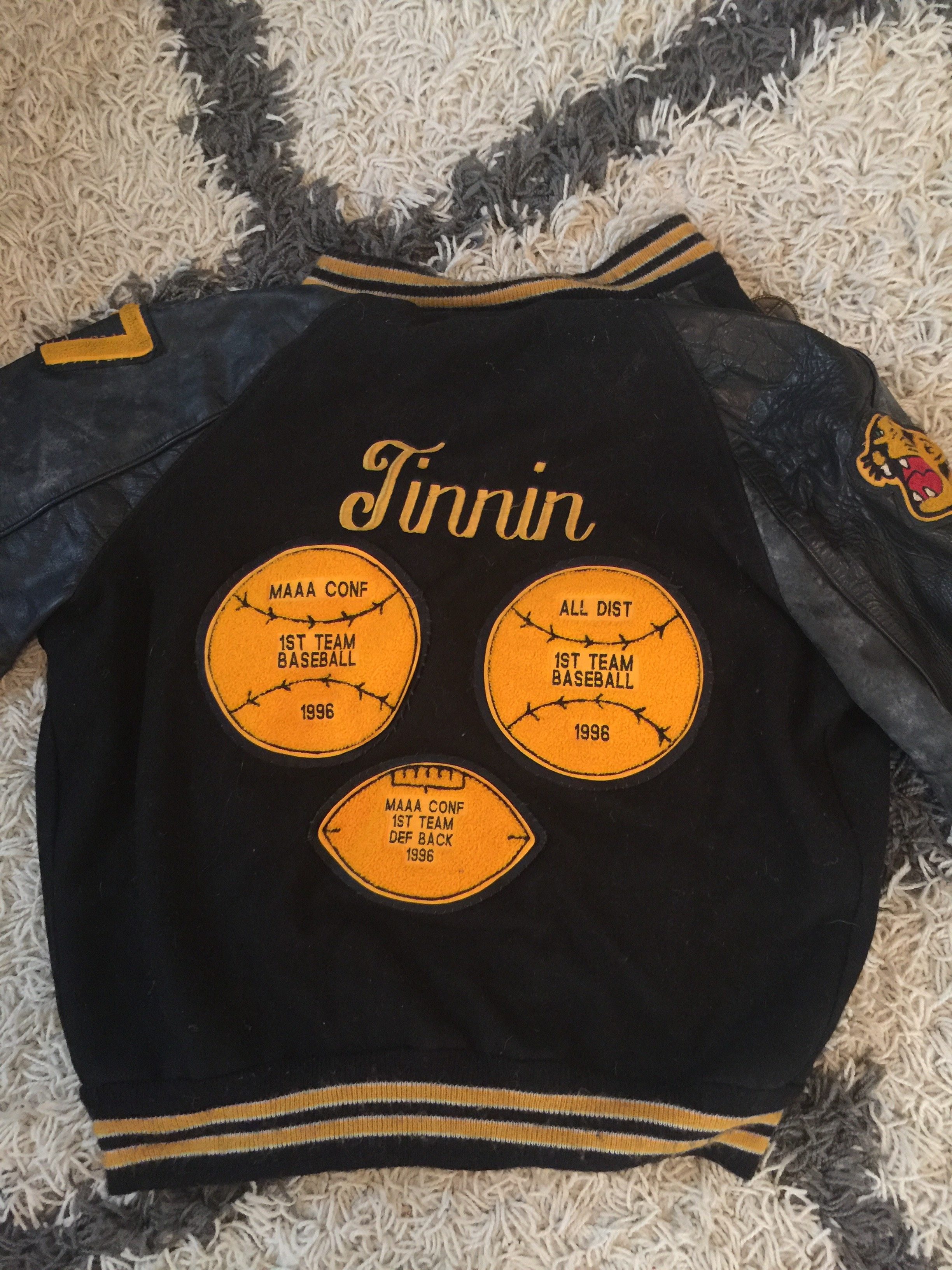 Later that night, B asked if I would take a ride with him to talk. Now B was only 15, also. So our friend (the one who went to my school) was going to drive us. Before we left I had a strange feeling. I can’t really describe it. I asked the girl who was having the party what her phone number was, just in case something happened. I wrote the number down on my hand and left. After driving around for awhile, B and I talked and decided we weren’t going to continue with our relationship. Before going back to the party we stopped at a gas station. I went inside to use the restroom and when I came out my friend and ex were driving away. Yes, they left me at a gas station. I was in tears and terrified. I was in a town I knew nothing about. I couldn’t have even told someone how to get to where I was. Remember when I said I had a strange feeling and I wrote down the girls phone number? My senses were correct. So I used the pay phone and called the number. After I explained what happened they sent some people to pick me up. Billy who happens to be one of my husband’s best friends pulled up and wouldn’t you know, Jason was in the car too.

Fast forward about a month later. I was cheering at basketball game in this town. As I was cheering I was eyeing a boy in the stands. He looked so familiar and I thought he was so cute! I just couldn’t place where I had seen him before. It was driving me crazy. I then noticed he had several girls sitting around him laughing and talking to him. I was sure one of them was his girlfriend.

At halftime I went to the concession stand to get popcorn. As I was about to re-enter the gym, a boy walks up behind me as asks me if I had been left at any gas stations lately?! I turn around and the boy I had been eyeing in the stands was standing right in front of me. All the pieces are coming together. I finally figured out how I knew him. I was so embarrassed and caught off guard that I just answered no and giggled. I then I turned around and ran back into the gym.

Jason still talks about how lame his “pick up” line was and how I just left him there. I personally thought it was a great pick up line. 🙂

On the bus ride home all I could do is think about this boy. For the life of me I could not remember his last name. I needed to get a hold him. I needed to talk to him again.

After I arrived home I called my friend (the one who’s from Jason’s town) to see if he knew Jason’s phone number and his last name. Luckily, he did .

The phone rang, then rang a second time. By the third ring a women answered. It’s late and I think I actually woke her up.

Me: Is Jason there?

Me: Oh, do you happen to have that number?

I hung up the phone and dialed the second number. Again, making another long distance call. I am such a rebel.

Woman: Can I ask who’s calling?

Me: This is Amy Henson

Woman: Hold on just a second.

She got back on the phone and told me he was in the shower. She asked if I could call him back in ten minutes. My hands were still shaking as I hung up the phone. He was in the shower? WHAT?! Who takes a shower at 10:00 at night? On a school night, too. I was so embarrassed. I just knew he didn’t want to talk to me and the “I’m in the shower”, is the most obvious excuse in the book. I decided I was NOT calling him back. Nope, not going to do it.

I kept watching the time. Five minutes went by, then seven. Ten minutes passed and I picked up the phone and dialed the number again. I caved, I just had to try again. The phone rang and on the second ring, he answered. Turns out he really was in the shower. Like I said it was after 10:00 and I was not allowed on the phone this late. My parents thought I was in bed. So I had to talk quietly. After two hours of talking on the phone, my mom caught me. She saw the red light on the cordless phone charge stand on. She barged into room and grabbed the phone and hung up on Jason. I was mortified. I was also in trouble. The good news is we had our first date planned for December 7th.

They next day I got to School around 7:15 a.m. I used my lunch money to call Jason from the pay phone. Remember, its’ a long distance call so it cost $1.50. Maybe it was $2.00. I honestly don’t remember. I just had to tell him I was not the one who hung up on him, it was my mom. Unfortunately, his answering machine picked up and my lunch money was gone. I then went to plan B. I had a teacher who had a phone in her room. I decided to ask, no beg her to let me use it. I even offered to pay for the call the next day with my lunch money. Being the nice teacher she was, she let me call him. I can’t even tell you what that meant to me. This time Jason answered and I was able to explain.

The day was finally here, December 7th. I decided to dress nice. I wore a pair of plaid stirup pants, a cream colored turtleneck sweater, my black hills gold necklace and a pair of gold hope earnings. I twisted the back of my hair up into a clip. Sort of like an up-do. My hair was long, or long to me.

I told my mom I really thought this boy was different. Not like the others. I remember her looking at me and asking why I always pick boys from other towns? Well, she did have a point. I always seemed to have those long distance relationships.

Jason pulled up in his white 1987 Honda Accord and knocked on the door. As I opened the door and was grinning from ear to ear. He was wearing a plaid flannel button down top, light color Levi jeans, work boots and a hat. He was just perfect. I introduced him to my mom and sister. I asked my sister, Ashley if she would take a picture of us. We used a camera that took film. You know what I am talking about. There were no retakes, or let me check the photo. Little did I know that picture would be something so meaningful. I now look back and can’t believe I didn’t scare him away with asking if we could take a picture on our first date. Here is the actual picture from our first date. 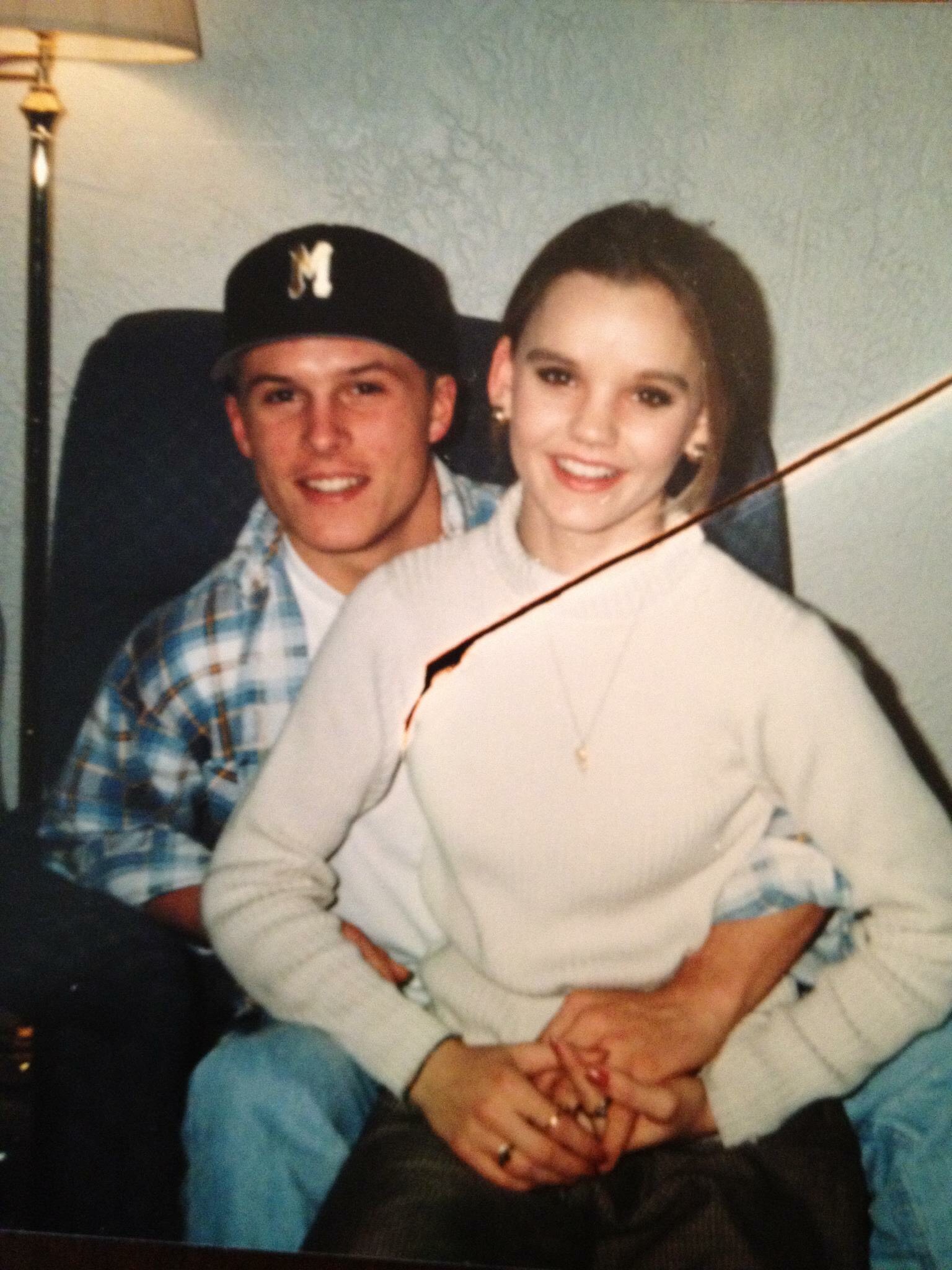 As I got into his car I noticed a bag phone on the floorboard. You know, a cellular phone in a bag. I looked at him and asked it he was rich. Only rich people had bag phones. At least that’s what I thought. He laughed at me and told me no. It was his moms phone and he had it for emergencies. But still, I thought. 😉

Jason told me to pick where I wanted eat. I chose Steak n’ Shake. Of all places, that is where I picked. lol  I ordered the club sandwich with fries and a strawberry milkshake. Still one of my favorites. After dinner we rented two movies and headed back to my house. The rest is history.

Twenty one years and three kids later, here we are. Never in my wildest dreams could I have picked a better man to be my husband and the father of my children. I still get butterflies when I think of him. My heart still skips a beat when we are together. I’m certainly not saying it was an easy road. I think marriage is hard. It takes work, hard work. Not to mention, I was only 18 (just shy of 19) when I got married. I’ll save that story for another time. We have had plenty bumps in the road, but I wouldn’t change a thing. I am beyond grateful to have this man in my life and I look forward to many more years with him. 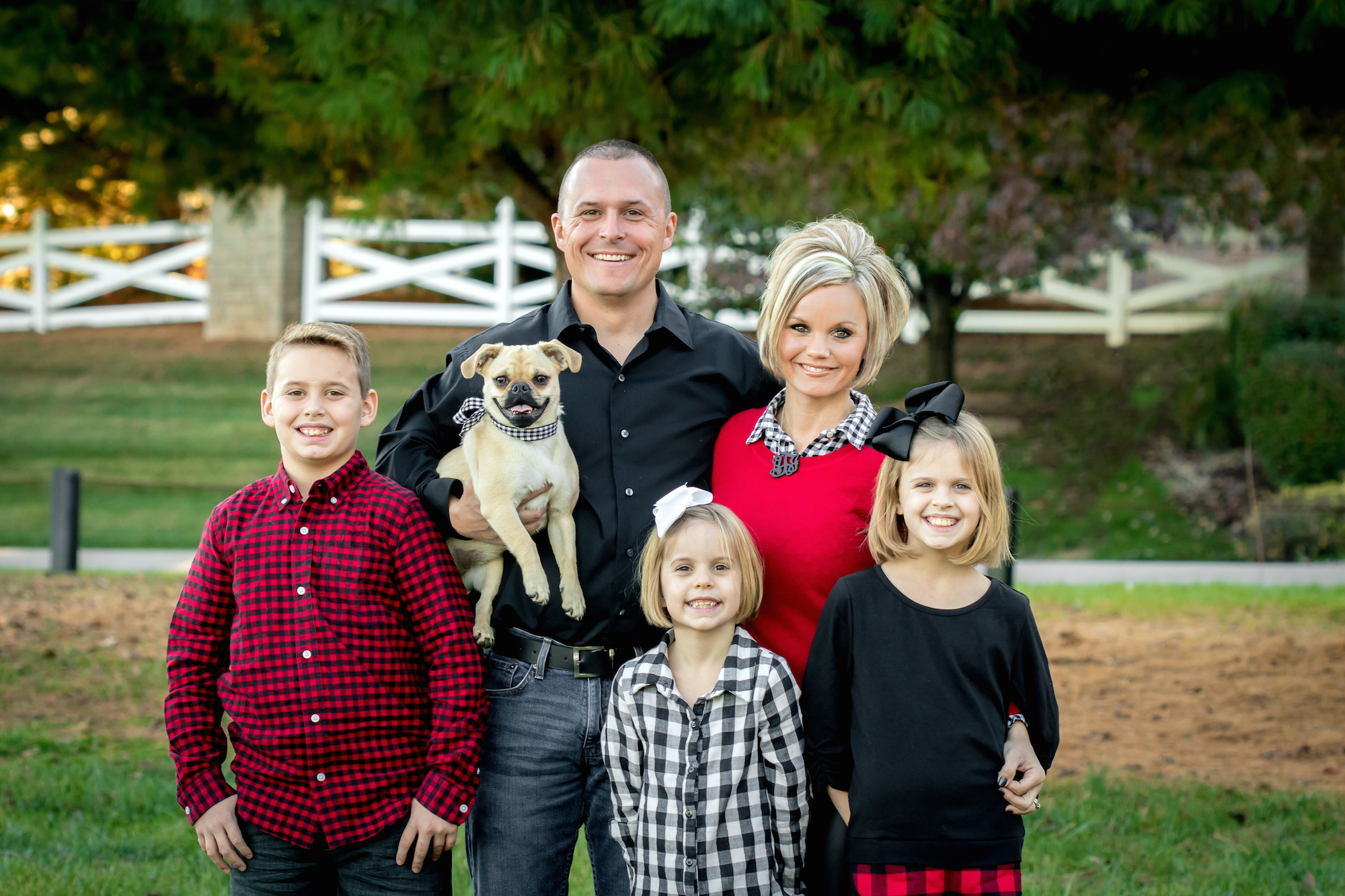 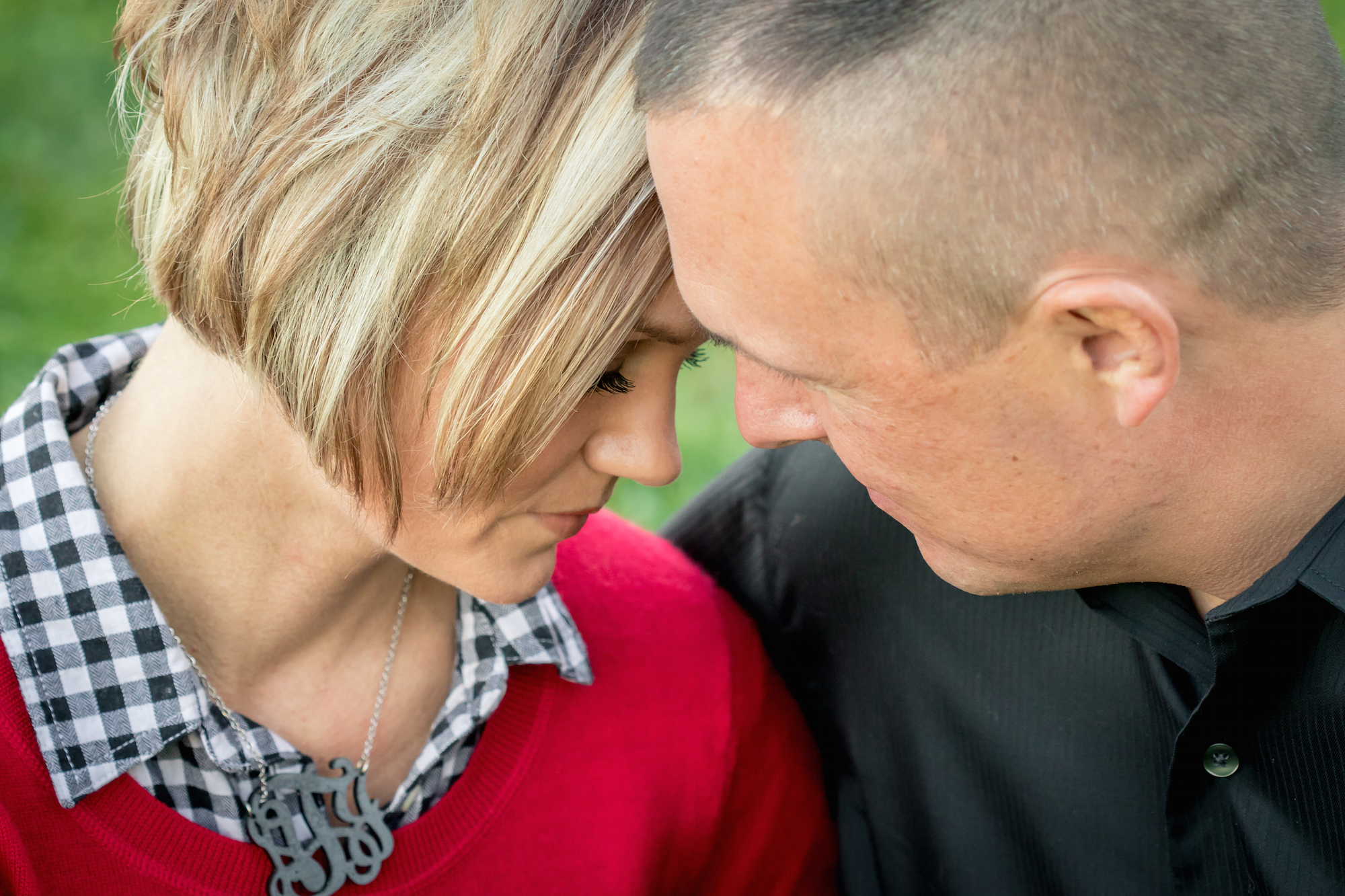 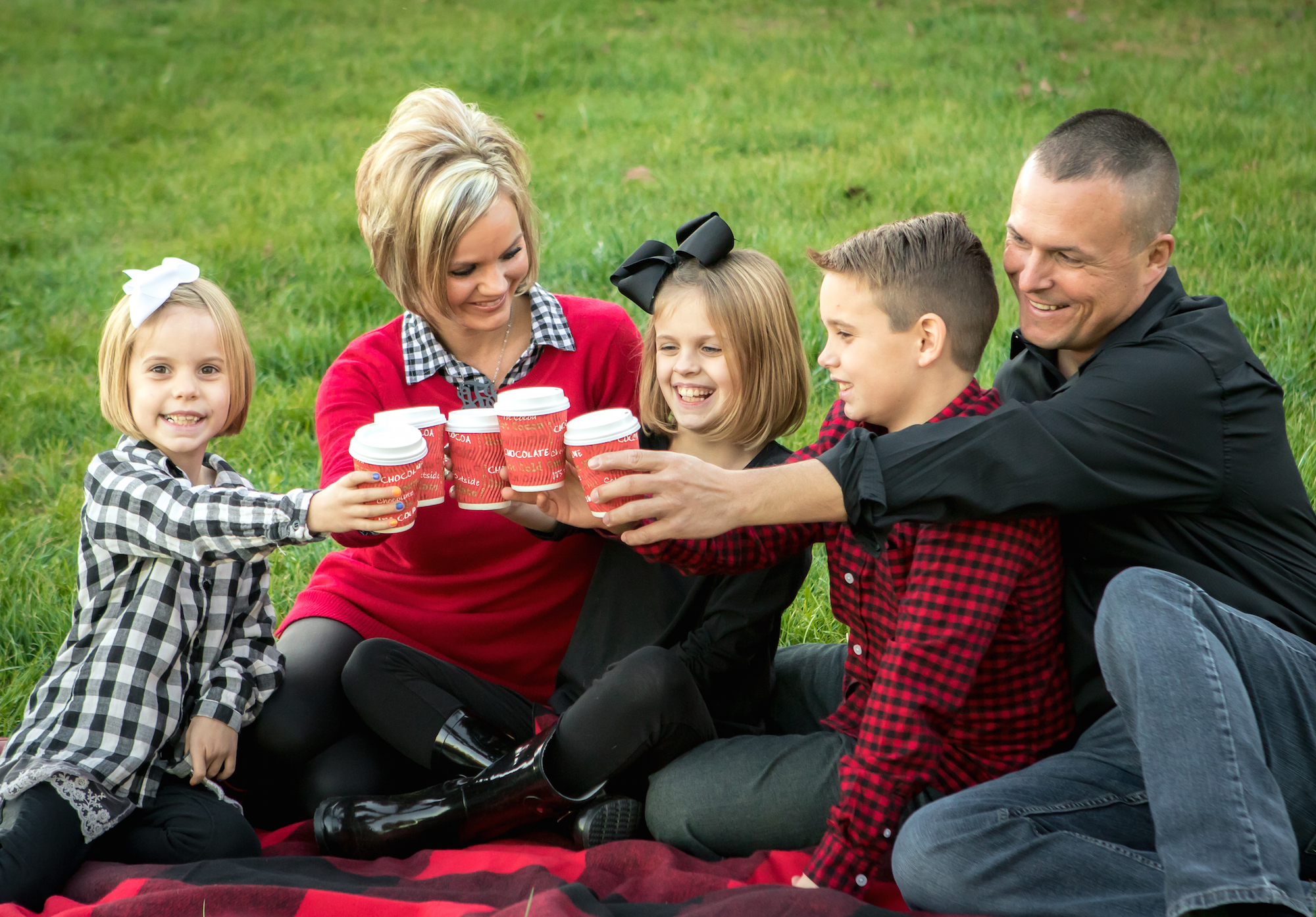 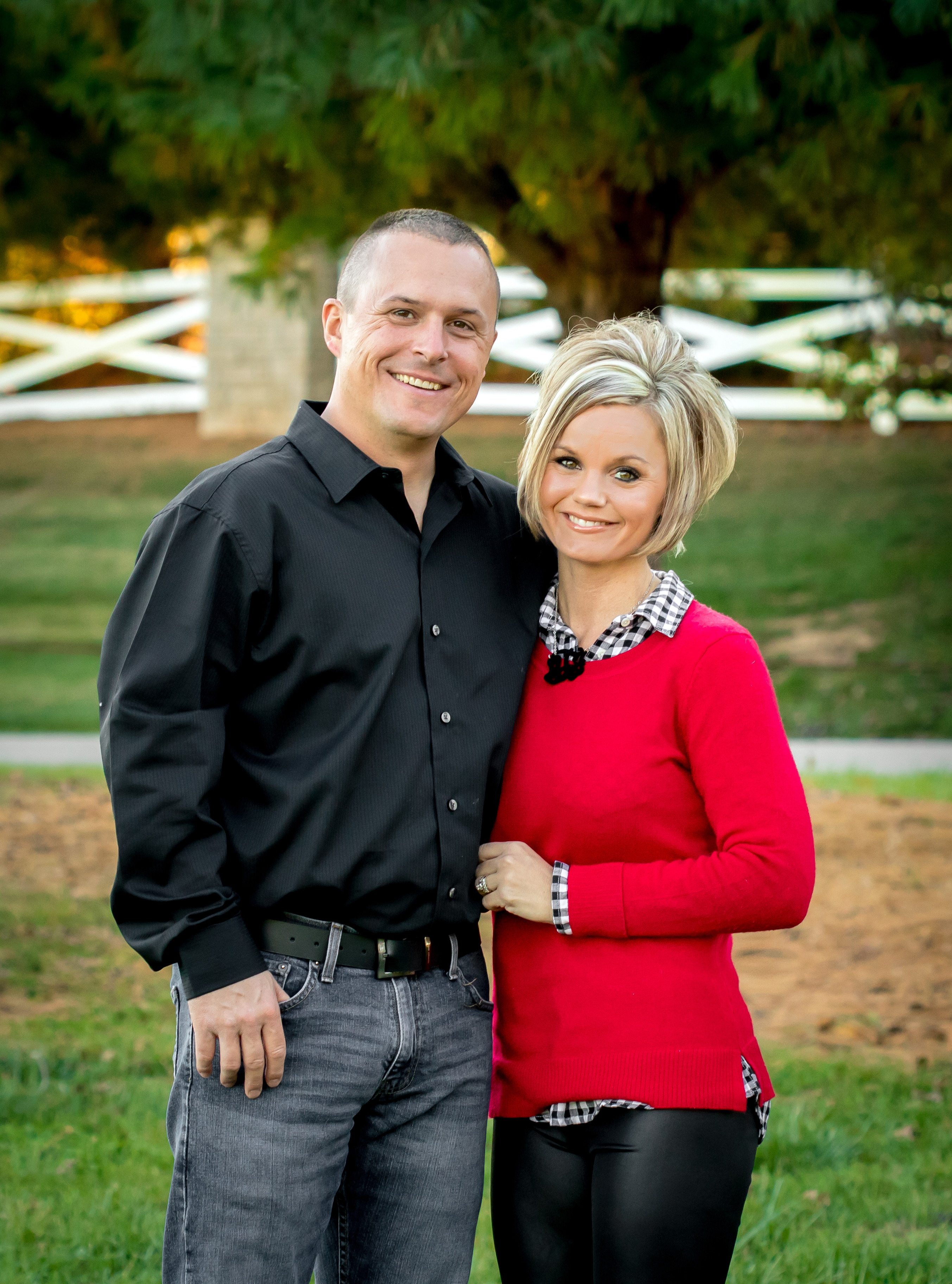 Welcome! My name is Amy Tinnin and I am so glad you are here! A Cup Full of Sass is a place where I share Fashion, Recipes, Home Decor, Hosting and Entertaining ideas for the everyday Woman. I love connecting with readers so follow me on my social networks and let's be friends. Read More…